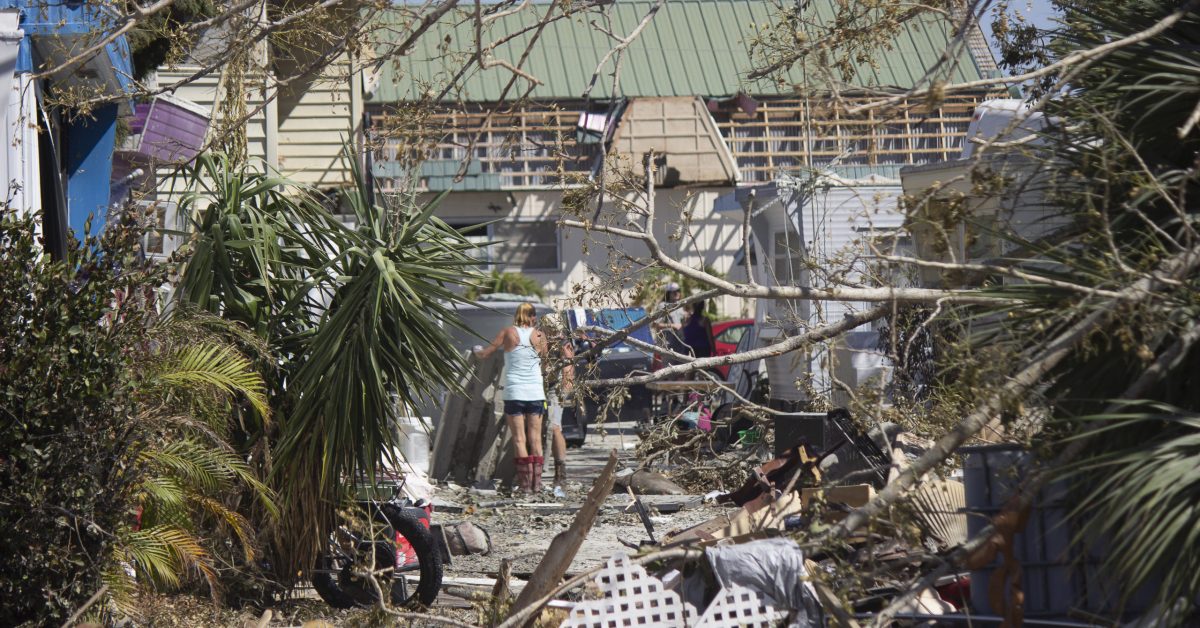 While Hurricane Ian took away pieces of a lot of people’s lives, the catastrophic storm provides an important takeaway for Southwest Florida.

“The lesson doesn’t change. It’s be prepared,” says Collier County Commission Chairman Bill McDaniel, stressing the importance of the scouting motto even for hurricanes. “There’s a reason why we share with folks that you should have 72 hours’ worth of supplies on hand all the time, way before hurricane season starts.”

Following the hurricane’s Sept. 28 landfall on the Gulf Coast, winds were still 60 to 70 mph after the worst of the storm whipped through—initially preventing local rescue efforts, the majority of which were people trapped in flooded homes. “We had a hundred 911 calls queued up, but couldn’t move because we’re statutorily prohibited from moving [when winds are] above 50 mph,” McDaniel says.

Changing weather conditions made it difficult for coastal dwellers to adequately prepare in time.

“No storm is the same, and that’s the difficulty with this,” he says. “On Monday [Sept. 26], I had a forecast from both the Miami National Weather Center and my internal people that that storm was going to be passing us on Wednesday night at low tide. And so we thought with the low tide and the tide going out and the winds coming in, it’s got a balance and we’ll have ample room in our harbors and bays to be able to take the surge that comes.”

Over the course of a few days, the hurricane’s forecast cone of probability moved down the coast from the Big Bend area near the Florida Panhandle to Tampa Bay to Venice and then near Fort Myers. The massive storm’s timing and target caught many off guard. “At the end of the day, it’s the wrath of God. You don’t get to pick,” says McDaniel, who has seen a multitude of hurricanes while living here for more than 40 years.

The county had 1,700 homes in the initial damage assessment for flooding, at least 50 of which were irreparable at first glance. “It was predominately saltwater, where with Irma and Wilma and even Andrew we had enormous amounts of flooding but it was more to do with freshwater flooding in the inland areas,” McDaniel says.

The massive hurricane will take months to recover from because of the extensive damage caused by flooding, says Naples City Manager Jay Boodheshwar. “Pretty much every establishment got water inside of it. There’s water damage in the city, businesses and residences alike,” he says. “It definitely was a water event.”

During the storm, city staff watched the water rise to the top step of City Hall, across from downtown’s Cambier Park, which was submerged in an estimated four or five feet of water. “We had six feet of water around City Hall. It literally was a moat. We were trapped. We could not get out,” Boodheshwar says.

The most damage occurred in waterfront communities; not only structures on the beach but those along inlets, bays, canals and rivers. The storm surge caused saltwater intrusion wherever the water flowed. “Saltwater is a terribly corrosive substance,” McDaniel says. “Thousands of cars have been lost, electrical systems and water systems and things along those lines.”

Collier County has moved its assets to assist the hardest-hit areas, including Vanderbilt Beach, Park Shore, Seagate and Pelican Bay in North Naples; Bayshore Drive, Haldeman Creek, Henderson Creek, Brookside Drive and Estey Avenue in East Naples; as well as Isles of Capri and Marco Island. Some areas such as Gulf Harbor near Wiggins Pass had 10 to 12 feet of storm surge, McDaniel says.

“It’s heartbreaking. You drive around in some of these neighborhoods and … this is people’s lives,” he says. “I stopped and gave a case of water to a lady on the corner over here. There was a whole entertainment center full of old records and pictures and everything sitting on the curb. We’ve got to be on point with our residents and our contractors and our permitting and just make sure that we’re making life as palatable as possible for these people to reconstruct as quickly as possible.”

Flowing water also brought damage to businesses along Fifth Avenue South, Third Street South and Gulfshore Boulevard. Tin City, Park Shore Plaza and The Village Shops on Venetian Bay were among the local retail centers affected by flood waters. The iconic Naples Pier was seriously damaged, putting the city landmark out of commission through next year.

The Turtle Club, one of the most popular waterfront restaurants in the Naples area, is one of the longtime local businesses that won’t be able to open this season. Founded in 1998 on the grounds of the Vanderbilt Beach Resort on the Gulf shore in North Naples, The Turtle Club was destroyed by storm surge.

“It’s pretty much toast. I hate to say it,” says co-founder Peter Tierney, who was in North Carolina when Ian hit the coast. “I left two days before the storm thinking it wasn’t going to do much.”

While the Vanderbilt Beach Resort survived the storm, its ground-floor restaurant didn’t. “The old girl got hit pretty hard. It’s going to be a while before we can get that back up and running again,” Tierney says.

The beachside restaurant will sit out this year, with its rebuilding targeted to be finished by the 2023-’24 season. “It’s going to be a big job but we’re up for it,” Tierney says. “We’ve just got to start rebuilding, unfortunately. We’re just going to rebuild and we’re going to try to do it as quickly as we can.”

The construction of its building has always been to code, which required it to have breakaway walls designed to collapse from storm surge, allowing water to flow through and under without compromising the rest of the structure. “The walls themselves did exactly what they were supposed to do,” says Tierney. “By doing that, it kind of washed away all the interior.”

Although flooding from the extreme storm surge has subsided, extensive water damage remains in many coastal homes, businesses and vehicles. Newer homes and businesses, built to more stringent codes and frequently at higher elevations, generally fared better than older ones.

Boodheshwar remains confident that the community will be able to pull together and get past the catastrophe. He doesn’t think the record-breaking weather event necessarily will delay the region’s busy season or seasonal residents returning to Collier County.

“A lot of people are anxious to come and see their properties, in fact, and are wanting to come back into town. We understand that,” he says. “I think by the time season comes around we’ll be on the tail end of getting through this. Obviously, the pier’s not going to be rebuilt by then, but I’m very hopeful that we’re going to get to some level of normalcy.”

Hurricane season continues through the end of this month.

A week in the wake of Hurricane Ian